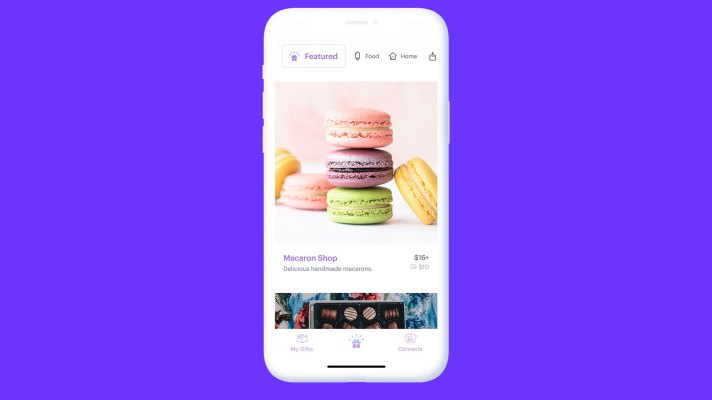 Unless you’ve got someone’s Amazon Wish List, gift giving today can still be fairly difficult. You don’t necessarily know a friend or family member’s shipping address, their sizes or their particular tastes, at times. A new startup called Goody, backed by a recent $4 million fundraise, wants to help. Through its newly launched mobile gifting app, Goody lets you celebrate your friends, family and other loved ones with a gift or, soon, even just an “IOU” that lets them know you’re thinking of them.

To do so, you first download the Goody mobile app for iOS or Android, then browse across the hundreds of brands and products it offers. You also can filter these by occasion, like birthdays or holidays, or by a specific need, such as gifts to say congratulations or get well.

When you find a gift you like, you just enter the recipient’s phone number. Goody then sends a text that lets the recipient know that you’ve sent them something. The recipient clicks the link to accept the gift, which opens a website where they can see what you’ve selected, while also customizing any specific options — like their clothing size, color preferences or what flavor of cupcakes they’d like, for example.

Here, they also provide their shipping address, and the gift is sent. Afterwards, they can choose to send a thank you note, as well.

What makes this experience work is that — unlike some gifting startups in the past — Goody doesn’t require the recipient to download an app, nor do you need to know anything other than a phone number of the person you want to send a gift to.

The idea for Goody comes from co-founder and serial entrepreneur and startup investor Edward Lando, whose prior company, YC-backed GovPredict, was recently acquired. He was also the first investor in Misfits Market, serves on the board at Atom Finance and is a managing partner at Pareto Holdings, based in Miami, where Lando now lives.

Joining him on Goody are Even.com tech lead Mark Bao and Lee Linden, who notably sold his prior gifting startup Karma Gifts to Facebook back in 2012.

Lando says he was interested in working on the idea because he loves to send gifts, but thinks there’s a lot of friction involved with the process as it stands today. Meanwhile, gifts that are easier to send, like gift cards, can lack a personal touch.

“The most important thing for us is for Goody to feel highly personal,” Lando explains. “If someone sends you something through Goody [it should feel like], wow, they really thought about me — they picked out something for me. We don’t want it to feel like someone is just sending you a dollar value,” he says.

The mobile app launched in mid-December and now works with a couple dozen brand partners. Many of these are in the direct-to-consumer space or are otherwise emerging companies, like non-alcoholic aperitif Ghia, workout experience The Class, pet company Fable, wellness company Moon Juice, Raaka Chocolate and others.

Goody’s model involves a revenue share with its partners, where its cut increases the more sales its makes on the partner’s behalf.

Brands are interested in working with Goody, Lando explains, because it can help them acquire new customers with little effort on their part.

The app, however, wants to be useful to those who also just want to stay in touch with friends and family. On this front, it’s rolling out free gifts this week called “IOUs,” for telling someone you’re thinking of them — for example, by saying something like “I owe you dinner next time I’m in town” or sharing some other more symbolic gift.

The app will also later integrate a calendar that will help you track important occasions, like birthdays and other major life events.

Goody was founded in March 2020 and the app launched in mid-December of the same year. So far, around 10,000 gifts have been sent using its service, Lando says.

In addition to the holiday season, of course, the pandemic may have played a role in Goody’s early traction.

“I think the pandemic has been a big problem for everyone. And one of the things that people frankly don’t talk about enough, in my opinion, is the psychological toll the pandemic is taking on everyone…we are all creatures that enjoy social interaction. It feels good to see other people — especially the people you care about. And when you don’t, it really drains you of energy,” Lando says.

“This is obviously not the same as seeing people in person, but I do think that Goody is a nice injection of warmth and positivity…Everyone who uses it says they feel good after using it, which I think is rare,” Lando notes. 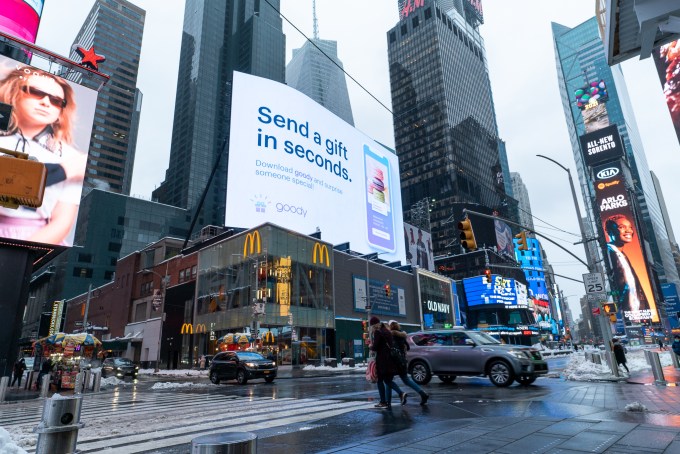 The startup, meanwhile, has raised a little more than $4 million in early funding from investors including Quiet Capital, Index Ventures, Pareto Holdings, Third Kind Venture Capital, Craft Ventures and the founders of Coinbase (Fred Ehrsam) and Quora (Charlie Cheever), among others.

Goody is a team of nine full-time employees, based in Miami and elsewhere, working remotely. Ahead of Valentine’s Day, the company snagged a spot on a Times Square billboard to advertise its app, in the hopes of gaining new users during one of the bigger gifting holidays of the year.

History is littered with the remains of gifting startups that either died or exited years ago, having failed to generate a large, sustainable audience — including the likes of Bond, Giftly, Token, Sesame and others. But the rise in D2C brands combined with the decline in young people’s use of Facebook for discovery purposes could potentially breed an environment where an alternative gifting startup could grow.

The app is available as a free download on the App Store and Google Play.

Goody raises $4 million for its mobile app that lets you send gifts via text originally appeared on TechCrunch.com 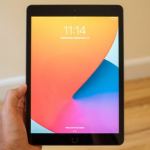 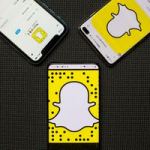