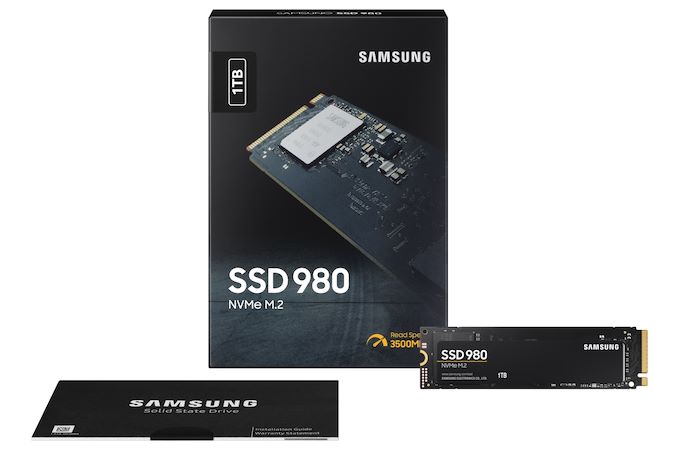 The new Samsung SSD 980 is the first retail-ready entry-level NVMe SSD from Samsung. Compared to previous SSDs from Samsung, it lacks any three-letter suffix at the end: it's not a PRO, nor an EVO, or even a QVO drive, because it doesn't fit into the established conventions for those product tiers. The SSD 980 slots into the product stacl at the bottom, but leaves a big enough gap for another, possibly better, model to come in later. Samsung is marketing the SSD 980 as a successor to the 970 EVO.

The SSD 980 is an entry-level NVMe SSD, using TLC NAND with a DRAMless controller. This makes it a new class of product for Samsung in the retail market, one it has never produced before. This kind of drive, with TLC and without DRAM, is already prevalent in the market from other turn-key solution vendors, and this type of drive has been quite popular with OEMs: it allows them to advertise a NVMe SSD without paying the cost of a high-end drive. 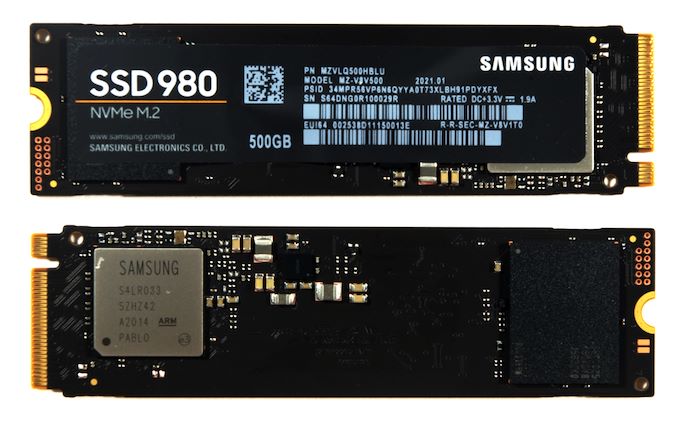 The new Samsung SSD 980 will come in three capacities, 250 GB, 500 GB, and 1 TB. In this review we have the two highest capacities, featuring a Samsung custom controller and a variety of TLC NAND (explained more in detail below). As an NVMe drive rated for PCIe 3.0 x4, peak sequential read speeds are rated up to 3.5 GB/s for the 1 TB drive. The drives will be rated up to 0.3 drive writes per day (so 300 GB/day on the 1 TB model) for five years.

The Samsung SSD 980 is built around its “Pablo” controller. This isn't actually a new NVMe controller, but it has has been shipping in the Samsung Portable SSD T7 family for over a year. This controller has half as many NAND channels as the controllers used in Samsung's high-end NVMe drives (four rather than eight), and no DRAM interface. Using the high NAND IO speeds supported by recent generations of 3D NAND, the Pablo controller is able to saturate a PCIe 3.0 x4 host interface with out needing eight NAND channels. 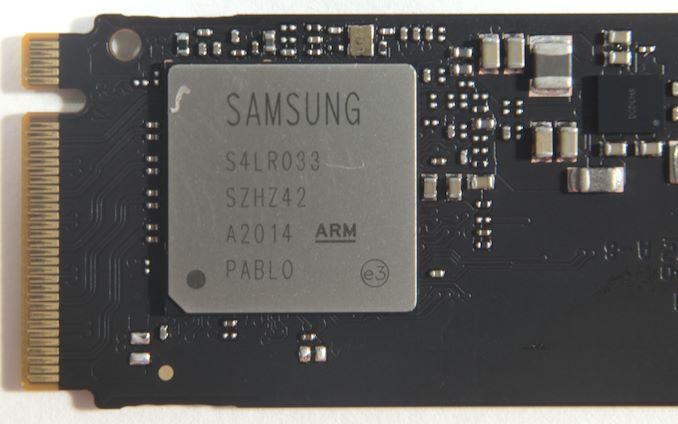 For this generation, Samsung has decided to use different NAND in different capacities of the SSD 980 family. Our 1TB review sample has Samsung's 512Gbit 128-layer 3D TLC NAND, which is the same NAND found in the 2TB 980 PRO. Our 500GB review sample is using 256Gbit NAND dies, meaning it has to use the same number of physical dies. The die count in the 500 GB unit helps alleviate the typical performance drops we would otherwise see from a lower-capacity drive, but the 256 Gbit NAND is Samsung's older 92-layer TLC (as seen on the 970 EVO Plus), comapred to the 128 layer TLC we see in the 1 TB model. Due to the die counts, the 500GB model ends up near the performance of the 1 TB model, but slightly slower due to the older NAND.

Mixing NAND like this within a product line is increasingly common, especially for low-end SSDs where commodity margins might be tighter. It also might help explain why Samsung's marketing materials for the SSD 980 refer to the 970 EVO as a predecessor, rather than the 970 'EVO Plus'. We have previously seen Samsung mix NAND generations with the 850 PRO and 850 EVO SATA SSDs, but that was more of a straightforward transition during the middle of the product cycle rather than mixing from the outset. It would not be surprising to see the smaller 980s eventually transition to 128L NAND as Samsung's fab output shifts, provided the SSD 980 stays on the market long enough and performance levels can be equivalent.

Updates with the SSD 980

With the SSD 980, Samsung has shifted to a more aggressive SLC caching strategy, more than tripling the maximum size of the cache as compared with the 970 EVO (Plus). They made a similar shift with the 980 PRO. This is following a general industry trend toward larger SLC caches, most noticeable on QLC NVMe SSDs, which helps improve performance on many benchmarks and some real-world workloads. While good for performance numbers in short burst tests, it typically comes at the cost of performance when the cache fills up, or the drive fills up. For an entry-level drive that isn't intended for heavy workstation type workloads, this optimization toward peak performance makes a lot of sense.

Even though it's a more low-end product than any of their previous NVMe SSDs, Samsung is still giving the SSD 980 a five-year warranty with a 0.3 DWPD endurance rating, the same as all their recent EVO-tier drives.

A key part of Samsung plans to achieve good real-world performance with the SSD 980 is the NVMe Host Memory Buffer (HMB) feature, which we have covered in depth in the past. In brief: the DMA capabilities of PCIe allow an NVMe SSD to efficiently access the CPU's main memory/DRAM. The NVMe host memory buffer feature allows the operating system to give the SSD a small amount of DRAM to use for the SSD's own internal bookkeeping. Performance isn't as good as having DRAM on the SSD itself, and the amount of memory allocated is usually pretty small, default of around 64 MB but up to 1 GB, but it's enough to improve performance on a lot of real-world workloads.

Assuming the drive's Flash Translation Layer has a typical design, a HMB of 64 MB is enough to cache the logical to physical address mappings for about 64GB of storage. That's a very tiny amount of host RAM, but 64 GB of storage is a lot more than typical consumer workloads need to actively use at one time. The key part here is 'in use' – the HMB will only fill (and expand) as data is used in the drive for that session. So even though a top game might be 250 GB to install, it might only use 50 GB to play on a particular level.

The Samsung SSD 980 requests 64 MB of host ram for its HMB, but is willing to make use of as little as 16MB. These values are similar to other DRAMless NVMe SSDs we've tested. For this review, we've run the synthetic benchmarks with HMB enabled (the default on recent operating systems) and with HMB disabled to illustrate its impact.

The exception is the Mushkin Helix-L with the Silicon Motion SM2263XT controller: we didn't see any significant performance differences between HMB on and HMB off even on tests designed specifically to illustrate the effect of HMB, so it's pretty clear that drive's firmware never gets around to actually using the 64MB it asks for.

Samsung and Entry Level: The History

Historically, Samsung has distanced itself from making true entry-level drives for the retail SSD market, preferring to hold onto some degree of premium status and retain a more comfortable profit margin. This is a strategy that it's  vertical integration has supported very well.

Samsung has covered some of the low-end before however, with the QLC QVO SATA SSDs. But even here, Samsung has retained slightly premium prices, so the main appeal has been how affordable these drives are at the extremely large capacities. Samsung has not yet brought QLC NAND to their consumer NVMe product line, so the other obvious formula for a low-end drive is to go DRAMless while sticking with TLC NAND.

The break from Samsung's typical PRO/EVO/QVO split is not entirely without precedent: in the past there have been a few other occasions where Samsung has needed an extra product tier, resulting in the 750 EVO and SSD 850. Since then, Samsung has added the QVO tier of products, but the 980 doesn't qualify because it's using TLC NAND rather than QLC. Samsung also doesn't have room to decrement any part of the model number since there's no gap left between their 800-series SATA SSDs and 900-series NVMe. So we're left with the plain 980 while Samsung keeps a spot open for a better 980 EVO.

We weren't able to review the WD Blue SN550 when it launched at the end of 2019, but we obtained a sample to include in this review because the SN550 is the most important competitor to the Samsung SSD 980. The earlier WD Blue SN500 significantly raised the bar for DRAMless SSDs, and the SN550 improves on it in almost every way. The Samsung SSD 980 is rated for much higher peak performance on sequential and random IO, but for more real-world workload the SN550 won't be so easy to beat. We also have results from the older Mushkin Helix-L, though with apparently inoperative HMB support it's nowhere near as competitive. Also in the low-end NVMe market segment we have a pair of QLC drives: the Corsair MP400 with the 8-channel Phison E12 controller, and the Intel SSD 670p with the new Silicon Motion SM2265 controller.

In the more mainstream TLC NVMe market segment, the drive to keep an eye on is the SK hynix Gold P31. Like the Samsung SSD 980 it uses a four-channel controller, but the P31 has the usual full amount of on-board DRAM which makes it a higher class of drive. If Samsung releases a 980 EVO in the near future, it will almost certainly go after the P31's position in the market, though Samsung may also try for a slight performance advantage by including PCIe gen4 support.

We also have results from several other recent Samsung SSDs in different market segments: the 870 EVO TLC SATA, 970 EVO Plus high-end PCIe Gen 3, and 980 PRO high-end PCIe Gen 4. The latter was re-tested with updated firmware a few weeks ago, but we didn't find any notable performance changes with our test suite. 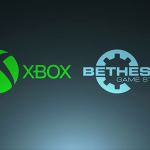 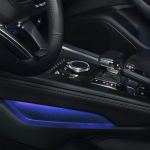