If you don’t feel like waiting for Oxygen OS updates to reach your OnePlus phone via the slow staged rollout, you might already be familiar with Oxygen Updater. The unofficial tool allows you to get the latest Oxygen OS version as soon as it’s out, but its design is getting a little long in the tooth. To celebrate the app’s 1-million-downloads milestone, the developers have decided to bless users with a facelift. It’s coming to them as part of version 5.0.0.

In a blog post, the developers explain that the redesign is “focused on three things: updating the design language throughout the app, improving certain UI/UX issues, and reducing CPU/memory usage as much as possible.” The former two are instantly noticeable when you open the app. The red top bar with tabs makes way for an all white interface with a bottom navigation (or gray, if you’re using dark mode).

Two more sections have been added in addition to Update, News, and My Device: About and Settings, which were previously accessible via shortcuts at the top. The update page is now also much more useful. There only used to be a big green checkmark telling you that your system is up to date, but now, you can also see which version exactly you’re on. 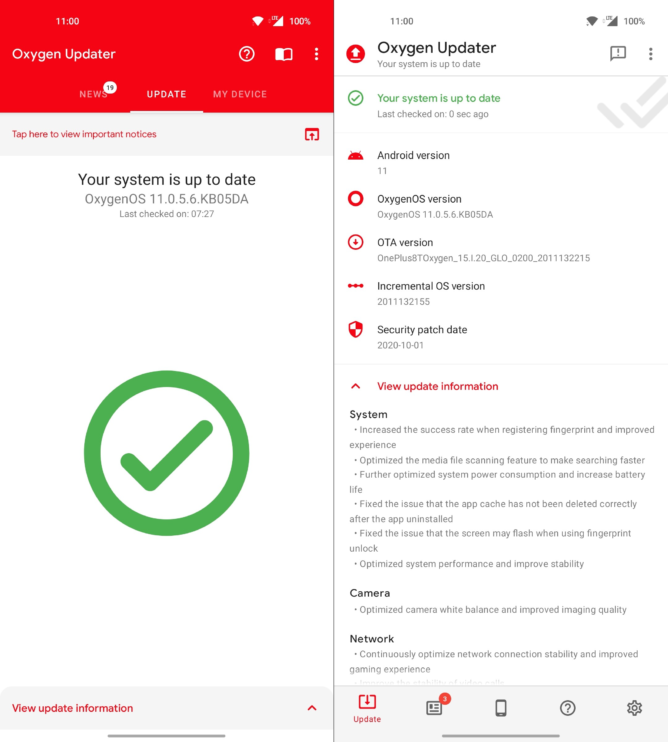 The My Device section now shows a miniature image of your phone, and the hardware and software stats are easier to parse thanks to icons accompanying each item. You’ll also find more information on why exactly a device isn’t supported yet, like when it’s brand-new or carrier-locked. Check out the rest of the changes in this gallery: You can download the latest version of Oxygen Updater on the Play Store or APK Mirror. It’s identical to the second 5.0.0 beta that fixed a few minor problems related to exiting the app and the news feed.

Rolling out in stable

The article was originally published December 8 and has been updated to reflect that Oxygen Updater 5.0.0 is now stable.