The last few years have seen quite a large shift in the mobile market as smartphone vendors have engaged in a literal arms-race aiming for the fastest charging phones possible. In only a few years we’ve seen phones go from what used to be considered “fast charging” at rate of up to 18W to new advertised 65W rates. What a lot of consumers however often misunderstand, is that these new fast-charging systems aren’t primarily enabled by new battery technologies, but rather by new advances in charging systems that have become more and more efficient. 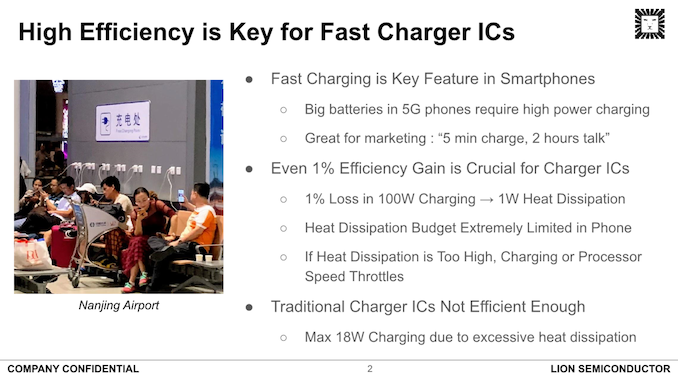 A smartphone’s thermal envelope is really only about 4W, maybe 5W in the very biggest form-factor devices nowadays. This would the be power dissipation that the phone is able to handle before its temperature rises to undesirable figures, both for safe of use for the consumer, as well as safety for the internal components.

This puts indirectly a fundamental physics limit to the charging speed of a phone; charging is always a lossy transfer of energy – be it on one side from the voltage conversion needed from the external charger to the internal battery charging voltage, or from losses from the internal resistance of the battery itself. At even a 99% charging efficiency, a 100W charging system would mean a 1W loss and heat dissipation in a phone. Given that a phone only has that fixed 4-5W thermal envelope – and you probably would still want to be able to actually use the phone while charging, it means that charging systems need to be as efficient as possible to get near that 100% mark to be able to reach higher wattage charging speeds. 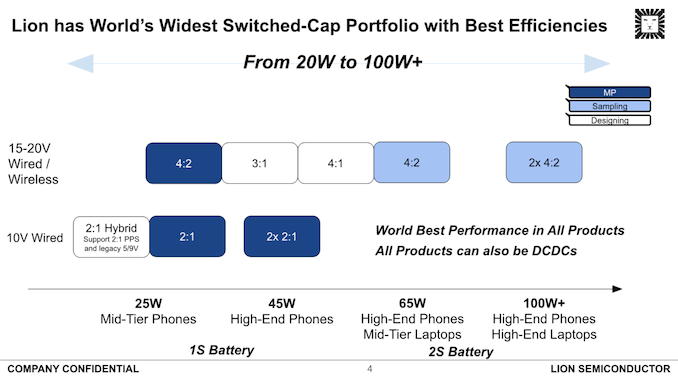 There are many different solutions to increasing charging efficiency, but today’s topic surrounds a younger start-up called Lion Semiconductor that specialises in a very different voltage conversion technology for power ICs, called switched-capacitor voltage converters. The San Francisco based start-up is seeing some increasing success in today’s mobile market where it enables vendors to achieve some of today’s fast charging phones. 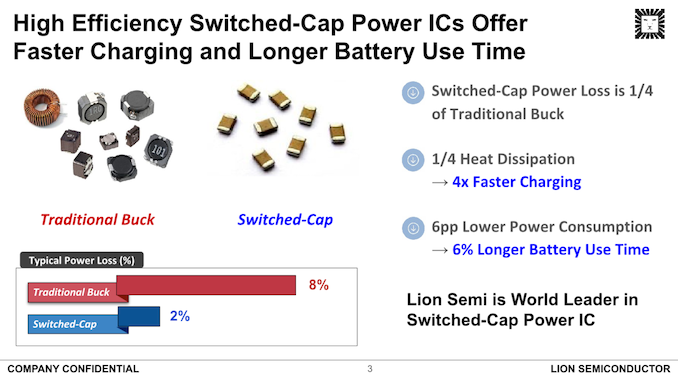 The key characteristic of a switched-cap converter as to opposed to more traditional buck-converter based ICs is that they are able to achieve higher conversion efficiencies with lower component complexity. A traditional buck converter as you’d find in any regular PMIC power rail on PC or mobile phones operates by pulse-wave modulation of an input voltage into an inductor that stores and “buffers” the energy into a lower “smoothed” output voltage. The problem with such designs is that one requires large PCB space as the magnetic components can be quite large in physical size. One can reduce the inductor size by increasing the PWM operating frequency, but this then increases the switching related power loss on the circuit. A typical buck converter nowadays ranges in the 90-94% efficiency, which isn’t enough for use-cases such as high-wattage fast charging.

A switched-cap design makes away with the magnetic components and simply switches its input power into a small number of capacitors, vastly decreasing the power loss by several factors by up to a factor of 4x. The disadvantage of a switched-cap system is that it cannot operate as a regulator, meaning its voltage conversion is fixed at design, instead of the dynamic voltage that a buck converter can achieve. In the topic of a smartphone, we’re talking mostly about voltage divider switched capacitor designs with a common 2:1 conversion ratio. 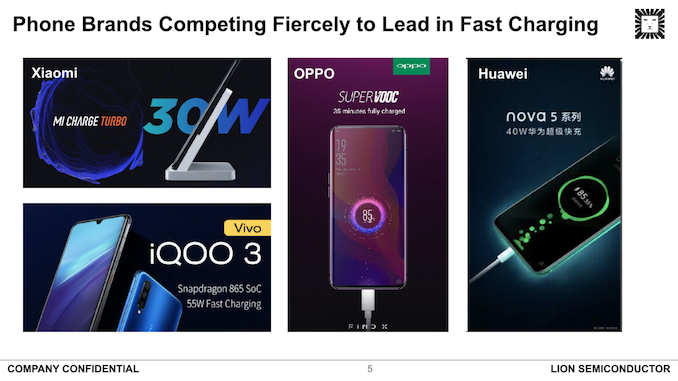 As noted, we’ve seen fast charging becoming a key marketing differentiation point for various smartphone vendors in the industry. Primarily we’ve seen a ton of push by Chinese-vendors that seemingly have been trying to one-up each other in terms of the achievable charging speeds on an almost bi-yearly rate. This aggressive push has been requiring charging technologies to innovate as they get nearer to the limits of what’s physically possible. 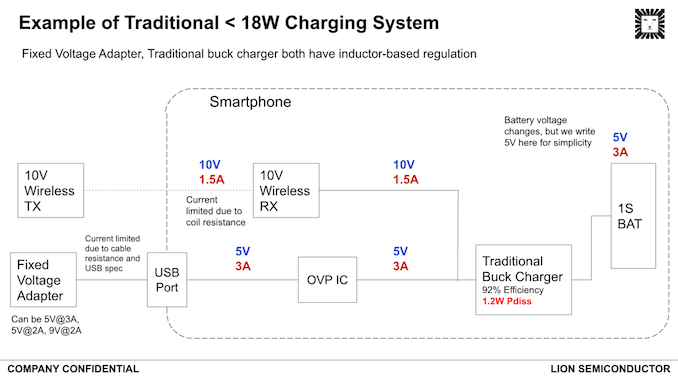 Your typical wired input voltage more often than not was found to be around 5V – with some other fast charge system operating at other higher voltages such as 9V in order to circumvent the current limit of USB cables. These fixed voltage chargers would feed into the phone, go through a simple over-voltage protection circuit, and be converted from their input voltage to the lithium battery charge voltage (Usually around 4.4V) by a buck converter. The conversion efficiency here is usually not too great at about 92% efficiency, meaning that for a 18W system that would result in a 1.2W dissipation loss inside of the phone. The conversion loss would be even greater for wireless charging systems that operate at higher voltages. 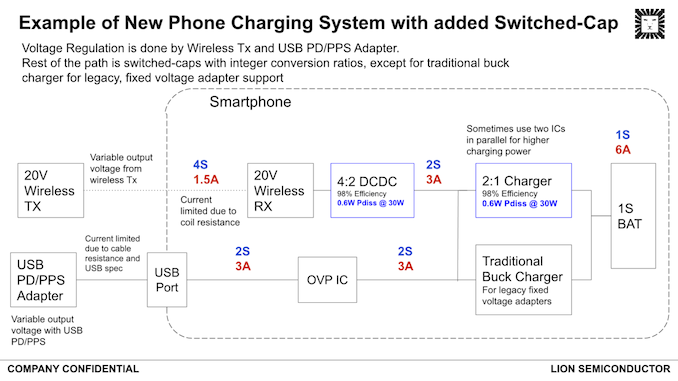 Newer generation phones have tried to solve this power conversion limitation by simply moving the main voltage regulation and conversion circuits to outside of the phone. USB PPS (programmable power supply) is the newest wide-spread standard that allows the actual chargers to regulate their output voltage in a fine-grained manner. In essence this eliminates the problem of limited power dissipation of a phone, but we need to add some complexity to the internal charging circuits of the phone. Because we’re still limited by the USB cable currents, to achieve higher power input the input voltage with a PPS or variable output voltage circuit is still bigger than the nominal voltage of the lithium battery, most of the time at a 2:1 ratio.

Such an implementation that precedes the USB PD PPS spec is Oppo’s SuperVOOC or OnePlus’ Dash Charge systems which have chargers that track the battery’s current voltage, most often at a 2:1 doubled voltage ratio. For context, usually a discharged lithium battery has a voltage of around 3.8V while fully charged it measures in at 4.3-4.4V. The charger here tracks the increasing voltage curve during charging, for example from a starting point of 7.6V to a fully charged voltage of near 8.8V.

This gain can also be notable for newer wireless fast charging systems that operate at even higher input voltages such as 20V. Using a 4:2 converter phones are able to efficiently divide this operating voltage once more before another division reduces it to the battery operating voltage. In essence, a 30W wireless charging system her would only have 1.2W total loss in the phone.

Lion Semi has such a design with Xiaomi, being employed as the wireless charging conversion IC in newer phones such as the Mi 10 series. 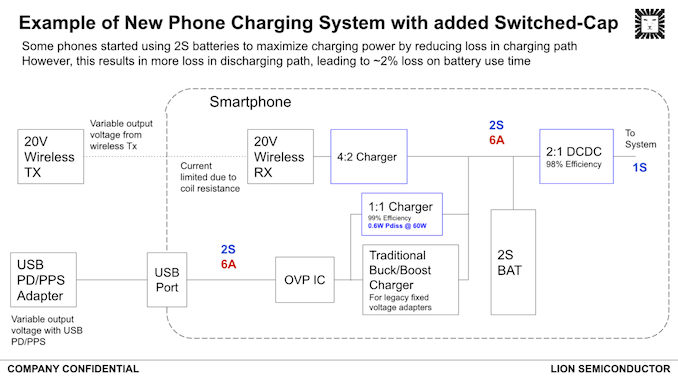 Some vendors have opted for even more exotic charging systems in order to achieve even higher charging speeds. 2S battery systems such as used by Oppo use two batteries connected in serial. What this allows is the elimination of any kind of voltage conversion within the phone during charging, and the charger IC here only controls the input current, achieving a 99% charging efficiency.

This is how for example Oppo’s newest phones are able to achieve 60W charging power without overheating the phones. The problem with such a dual-battery solution is that while it solves the charging power problem, smartphone components and PMICs are designed to operate with regular lithium battery operating voltages, so there’s a need to convert the higher series voltage of the two batteries down to a regular voltage, re-introducing a 2% efficiency loss, this time not during charging, but during normal operation of the phone. In essence, if Oppo advertises 4000mAh in such a phone, it effectively only ever is able to use ~3920mAh (@98% efficiency) as the rest is never “usable” by the phone other than being lost in conversion. In essence, it’s a compromise between charging speed and battery capacity of the phone. 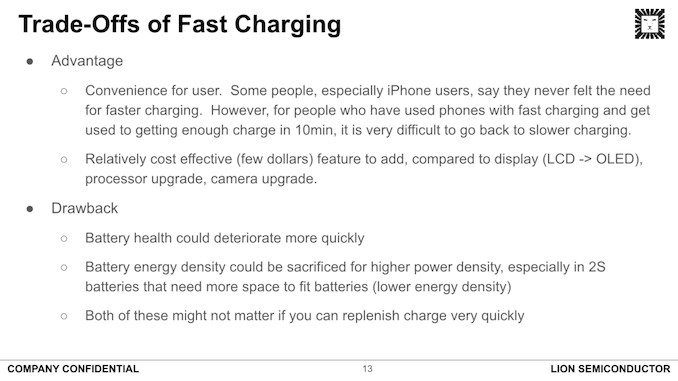 Overall, fast charging is a convenient feature to add to a smartphone as it’s relatively low-complexity in terms of adding to a design, and it solves the problem of battery anxiety by being able to top-up your phone in a very short amount of time.

Drawbacks continue to be that these new fast-charging systems are evolving at a much quicker rate than what battery technology is able to support, and will result in more severe capacity degradation over time. Common industry figures are quoted to be around 70% charge over 600 cycles with charging speeds that scale up to 2-3C (Coulomb).

Lion Semiconductor, while being the smallest vendor on the field, certainly isn’t the only one providing newer high-efficiency switched-cap solutions to the market as we’re also seeing solutions from the big incumbent vendors such as Dialog. As consumers become more demanding of such fast-charging systems, we’re likely to see wider adoption of such technologies to improve the charging efficiency of consumer electronics beyond just smartphones.