Lenovo might not have the greatest track record with its Windows-based laptops, but the company’s Chromebooks have usually been excellent. The Lenovo C330 from 2018 was our top pick for a budget Chromebook, and more recently, we gave the Lenovo Chromebook Duet an 8/10.

This time around, we’re taking a look at the Lenovo IdeaPad Flex 5, a budget 13-inch Chromebook that ranges in price from $360-410. There’s a lot to like about the Flex 5, but one or two flaws keep me from whole-hardheartedly recommending it to everyone.

I haven’t had the best experiences with Lenovo’s hardware in the past, but the Flex 5 seems very well-designed. It has an aluminum build that gives it very little flex (ironic, given the name), which adds to the laptop’s premium feel. No plastic to be seen.

The left side of the Chromebook has a USB Type-C port, an older USB Type-A connector, a 3.5mm headphone/microphone combo jack, and a microSD card slot. Even though the PC industry is moving away from USB Type-A, I still prefer laptops to include at least one port — you never know when you’ll need to plug in an older accessory. On the right side, you get a power button, volume controls, another Type-C port, and a Kensington lock. You can use either Type-C connector for charging the Chromebook.

The Lenovo Flex 5 has two features that are rare on Chromebooks, especially models in this price range. First, the speakers are located on both sides of the keyboard (like on MacBooks), instead of underneath the frame. The audio quality isn’t mind-blowing, but the speakers sound more clear than the bottom-firing speakers on most Chromebooks and other laptops.

The other unique feature is the physical webcam privacy shutter, which blocks access to the front-facing camera. Chrome (and by extension, Chrome OS) already tells you which web apps and tabs are using your webcam/microphone with easily-visible alerts, so a privacy shutter isn’t as useful here as it would be on a Windows laptop, but I still appreciate Lenovo adding it to the Flex 5.

Speaking of the webcam, it has an f/2.0 lens with a maximum resolution of just 1280×720. The quality is pretty standard for laptop webcams — it’s not great, but it’s enough for calls on Duo or Zoom. If you ever need something better, Chrome OS works with most PC webcams without any extra setup. 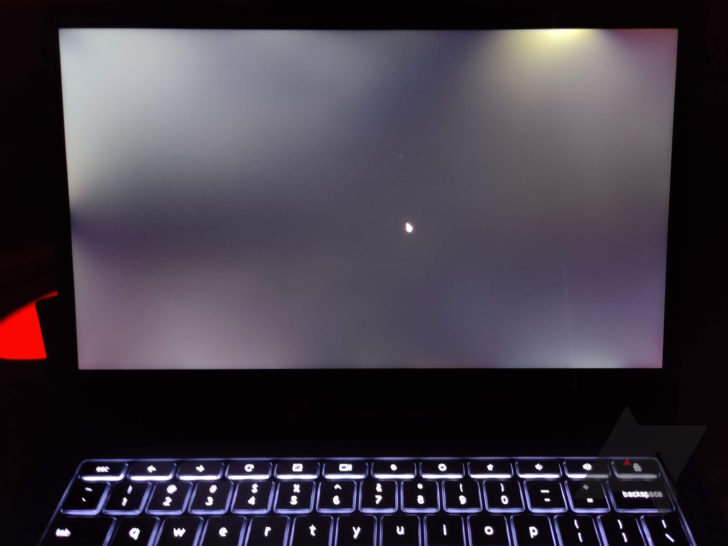 Light bleed on the display. This is at full brightness in a completely dark room.

Moving onto the Flex 5’s display, the IPS 1080p panel generally looks good, with crisp text (except with Android apps, which seems to be a Chrome OS problem) and vivid colors. However, light bleed at the corners is definitely visible when you’re watching dark content. There also doesn’t appear to be an oleophobic coating on the glossy screen, so it’s a fingerprint/smudge magnet.

Since this is a convertible laptop, you can flip around the screen and use the Chromebook like a giant tablet. The hinge feels sturdy enough, but the corners of the display are somewhat sharp, so holding it in tablet mode is fairly uncomfortable. The display also supports stylus input, but annoyingly, Lenovo doesn’t include a pen in the box.

The keyboard on the Flex 5 is great, and I even prefer it to the keyboard on the new $800 Asus Chromebook Flip C436. The keys are clicky, with a travel distance of 1.4mm. There’s also a backlight, though that’s fairly common on Chromebooks in this price range. 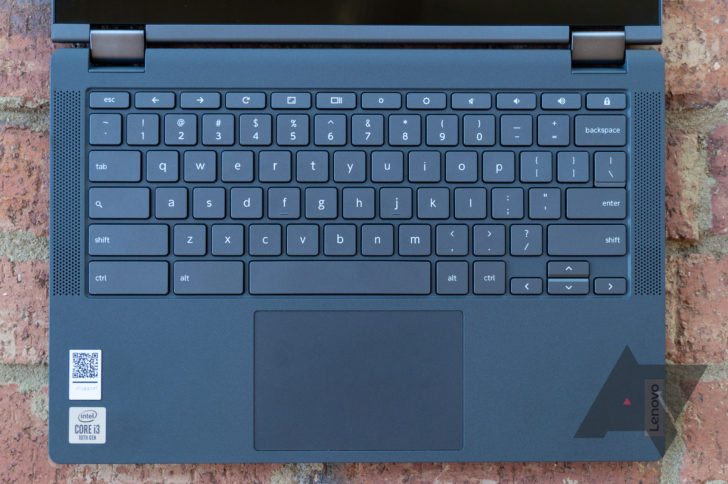 I don’t have any strong feelings about the touchpad. It’s large enough for gestures to work well, and even though clicks feel a little bit shallow, I don’t think anyone would have a reason to complain about it.

While the exterior design of the Flex 5 may give the impression this is an $800 laptop, the hardware inside does the opposite. I reviewed the highest-end configuration, which has an Intel Core i3-10110U processor. Even though it’s just a slightly-refined version of the 14nm Skylake mobile chips that Intel has been producing for the past five years, performance is still more than enough for Chrome OS. 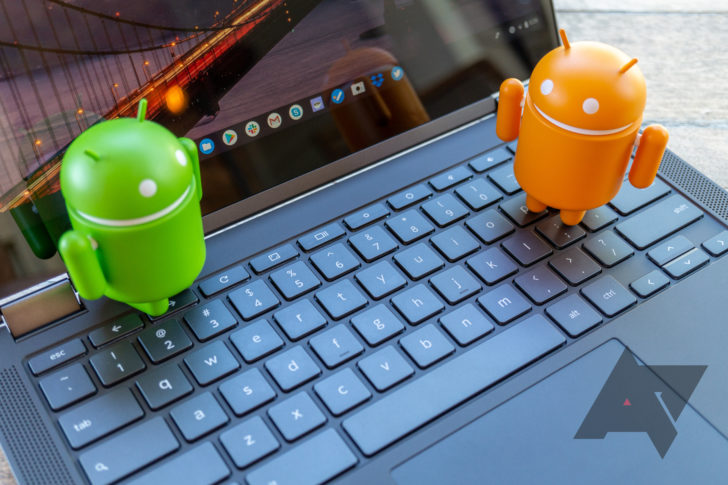 What isn’t enough is the 4GB RAM that Lenovo includes on all configurations of the Flex 5. Chrome itself is memory-hungry enough on its own, but when you combine that with an always-running container for Android applications (and a Linux container, if you want to use that), the Flex 5 quickly runs out of RAM and has to dig into the disk’s swap space. Once I passed five tabs, the Chromebook visibly started to slow down.

From left to right: Geekbench 5, Geekbench 4, Speedometer 2.0. Click to expand.

Both of the lower-tier models use an Intel Celeron 5205U processor, which is similar to the Core i3 on paper, but without hyper-threading — only giving you two threads of CPU performance. I can’t speak to real-world performance on those models, since Lenovo only sent me the Core i3 model.

Lenovo claims the Flex 5 has a 10-hour battery life, but just like with most laptop battery life estimates, that is wildly optimistic. In my usual workload of 5-10 Chrome tabs and a few Android applications, I usually reached 0% after about six hours of use. Battery life is highly dependent on how you’re using the Chromebook, so you might get different results.

The Chrome OS experience rarely differs from model to model, so if you’ve used any Chromebook in the past few years, you’ll feel right at home on the Flex 5. You get the full desktop Chrome browser, the Google Play Store for installing Android apps (even if they don’t work well on Chrome OS), and Linux application support. 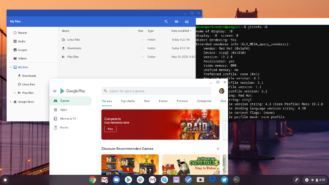 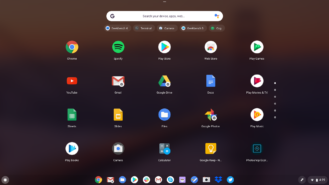 There is also GPU acceleration for Linux apps, but as I highlighted in my review of the Asus Chromebook Flip C436, that’s still not enough to play most Linux-compatible games. Productivity applications like LibreOffice and GIMP run fine, though.

This is also among the first Chromebooks to receive eight years of software updates, so its support won’t run out until June 2028. I still don’t like that Chrome OS ties software support directly to the hardware platform, but with only 4GB RAM, the Flex 5 isn’t enormously future-proof to begin with.

Should you buy it?

Maybe. If the IdeaPad Flex 5 was available in a configuration with the Core i3 CPU and 8GB RAM, I would have no hesitation recommending it as the 13-inch Chromebook most people should buy. The Flex 5 is built very well, and even the most expensive Core i3 model is half the price of the Asus Chromebook Flip C436 and $240 below the base model Pixelbook Go.

However, 4GB RAM is clearly the performance bottleneck (at least on the Core i3 model), and it becomes obvious once you open more than a handful of tabs. It’s a shame that Lenovo handicapped the Flex 5 by not providing enough memory for a good Chrome OS experience, though in fairness, there don’t appear to be any Chromebooks with a comparable processor and 8GB RAM anywhere near this price range. Lenovo’s own Chromebook 14e costs $356 and has 8GB RAM, but it uses a low-power AMD A4 CPU.

The less-powerful models of the Flex 5 look like better deals on paper, especially the 32GB model for $359.99. 4GB RAM is still going to be a sore point, but at least it won’t be as much of a bottleneck on system performance, and you can save some money. However, Lenovo didn’t send me those models, so I can’t say for sure if they are worth buying.