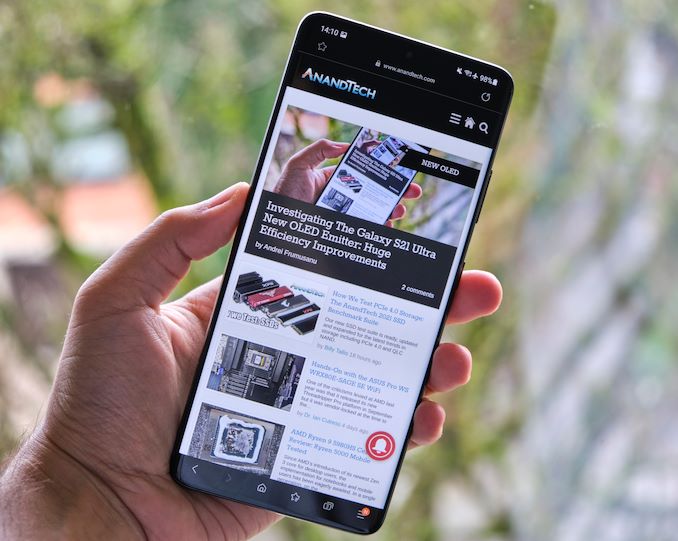 This generation of Samsung flagship devices in the Galaxy S21 line-up is quite different to that of past years, as Samsung has opted to create a much more uneven device line-up between the “standard” Galaxy S21, S21+ and the larger, more feature-packed Galaxy S21 Ultra.

Beyond the cameras and the general form-factor, the one area where the Galaxy S21 Ultra differs significantly to its siblings is the display. This is not only due to the cheaper siblings opting to downgrade to FHD resolution panels, but also because the S21 Ultra generationally employs a brand new first-of-its-kind OLED screen that pushes the boundaries in terms of technology.

One of the larger changes in the capabilities of the S21 Ultra display is that ability to finally run the screen at its native 1440 x 3200 resolution at 120Hz – an option that previously wasn’t possible on the S20 or Note20 series devices.

Samsung’s way of enabling this is relatively straightforward and in line with what’s we’ve seen in the OnePlus 8 Pro last year: the MIPI interface clock has been upped from 1157MHz to 1462MHz. It’s still a single 4-lane interface in terms of width, but like on the 8 Pro, the increased frequency allows for sufficient bandwidth to now enable the high refresh rate at high resolution. 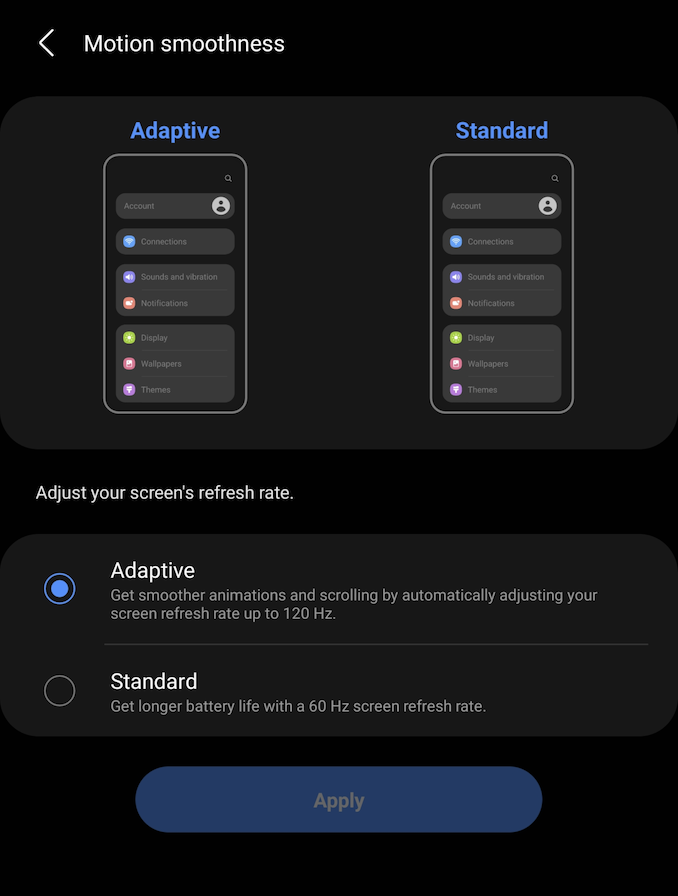 The panel of the S21 Ultra, much like the Note20 Ultra, uses a new hybrid oxide and polycrystalline backplane technology which is roughly equivalent to LTPO display technologies, and allows it to enable low refresh rates and seamless switching between refresh rates.

We’ve covered this new VRR (variable refresh rate) extensively in our screen analysis of the Note20 Ultra and how it works transparently to the hardware, and how the LFD (low-frequency drive) is able to achieve great power efficiency benefits when in the “Adaptive” screen refresh rate mode.

In this regard, the Galaxy S21 Ultra behaves the same as the Note20 Ultra. It’s to be noted that this also includes the behaviour of the VRR mechanism is not functional in low ambient brightness situations, with power consumption varying depending on what the ambient light sensor of the phone is picking up. This means that when in brighter situations where the ambient light sensor detects luminance beyond 40 lux, the VRR and LFD are working seemingly as intended.

The Galaxy S21 Ultra now allowing QHD at 120Hz, mean that we have 2 additional operating modes for the display compared to how the Note20 Ultra ran things: 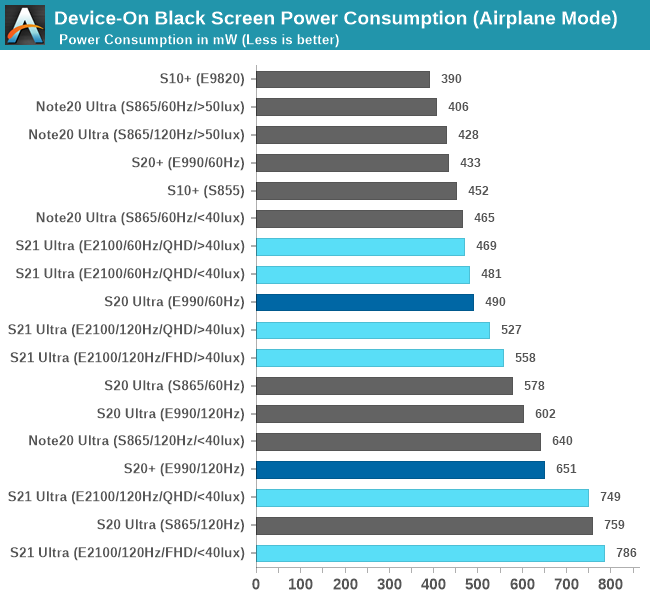 At 60Hz QHD resolution, the base power consumption of the S21 Ultra (an Exynos 2100 variant in this context), uses up 469 to 481mW of power on a completely black screen in terms of total device power. Similarly to the Note20 Ultra, we’re seeing that there’s still some sort of VRR/LFD operating when in the 60Hz mode as the display will consume less power when in brighter ambient situations, although the delta here is less than what we saw on the Note20 Ultra.

At 120Hz FHD, the same operating modes that possible on the Note20 Ultra, the S21 Ultra here seems to consume 130mW more for some reason, ending up at 558mW over the Note20 Ultra’s 428mW. I’m not too sure as to why we’re seeing this larger difference between the devices, but we are talking about different DDICs and different panels along with different SoCs here.

The S21 Ultra here compares very well against the Snapdragon S20 Ultra, using up to around 200mW less power, although the difference to the Exynos S20 Ultra isn’t that big at only around 45mW.

Unfortunately, the big catch on Samsung’s VRR/LFD mechanism is the same as on the Note20 Ultra, as when you are in ambient light conditions below 40lux, the power savings mechanisms do not work anymore, and the phone will consume a great amount of power, similar to what we’ve seen on the Snapdragon S20 Ultra last year.

If you’re using your phone in dark or even dim conditions, the variable refresh rate doesn’t work at all, and the 120Hz mode comes at a huge 300mW cost in baseline power. Because the display panel in general uses less power in such conditions, because I’m assuming it runs at lower brightness levels, this baseline power impact is a very large % of the total device power consumption.

I wasn’t a big fan of this aspect of the Note20 Ultra and previous generation 120Hz implementations – I wish Samsung instead of disabling the VRR/LFD under dim conditions would simply switch to 60Hz mode as that would be a much more power efficient alternative. Of course, the best solution would be simply to get rid of this ambient brightness limitation and allow 120Hz and VRR in all conditions – it’s still not exactly clear at to the technical reason why Samsung is employing this limitation in the first place, as I’m not seeing any difference at all in the screen quality when tricking the phone’s ambient brightness sensor and it switching between VRR/LFD on and off.

So, while the QHD 120Hz and VRR/LFD technology are interesting, they’re not exactly the newest technologies although Samsung does finally bring them to the Galaxy S series (well the Ultra at least).

The most interesting part of the Galaxy S21 Ultra display is the fact that it’s the first to use a new generation OLED emitter. Over the years, there have been noticeable jumps in OLED power efficiency, and most of them have been tied to introductions of new generation emitters which improved upon their predecessors. Samsung doesn’t really talk much about the technical descriptions of these emitters or their generational nomenclature, but the S21 Ultra is one such new generation.

To measure the difference between the screen generations, we simply measure the power consumption of the different devices at various display brightness levels, comparing the new Galaxy S21 Ultra to the previous-gen S20 Ultra as well as throwing in the Note20 Ultra as an extra data-point: 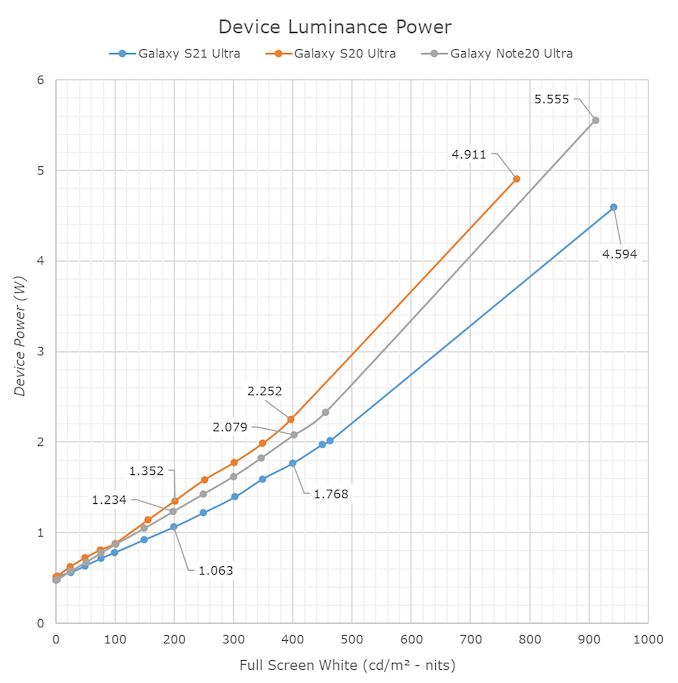 Right off the bat, we can see that there’s a great difference in display luminance capability as well as power consumption for the new S21 Ultra. The various devices start off at roughly the same baseline power consumption starting point on a complete black screen: 481mW for the S21 Ultra, 510mW for the S20 Ultra, and 476mW for the Note20 Ultra. We’re measuring things in the 60Hz mode as we’re just focused on the luminance power of the displays.

Compared to the S20 Ultra, at 200 and 400 nits, the S21 Ultra is roughly 22% more efficient when displaying full screen white. That’s actually a huge number given that we’re measuring total device power, not just the display. 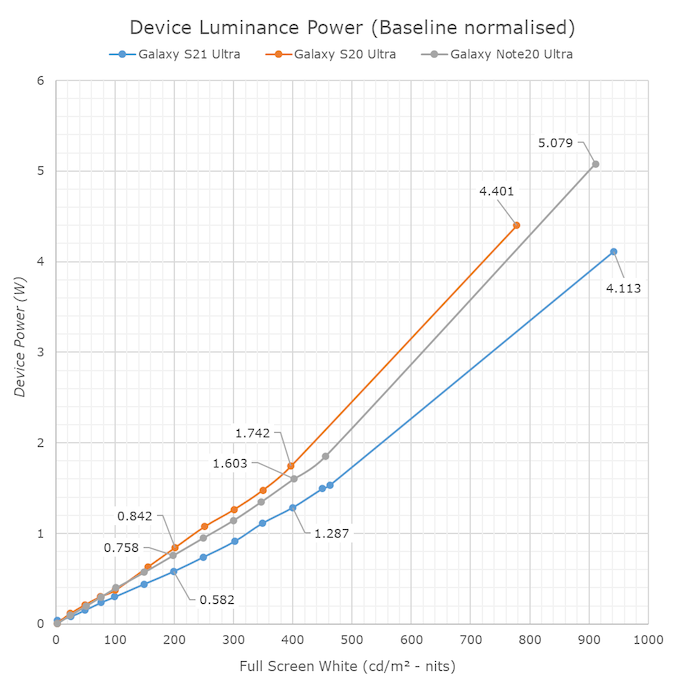 If we’re normalising the power curves to the baseline power, the S21 Ultra is actually even more efficient – 26% to 31%, depending on brightness level.

In fact, although the new S21 Ultra’s screen is the brightest that Samsung has ever delivered, reaching full screen white levels of up to 942 nits, it uses less power than the S20 Ultra’s 778 nits peak brightness. The peak power is also 20% lower than the Note20 Ultra even though it’s also brighter by 31 nits.

It’s interesting to see the S20 Ultra vs the Note20 Ultra power curves here – the two roughly match up to around 150 nits, after which the Note20 Ultra takes the lead, however the advantage here seems to be more fixed in terms of absolute mW, as the power curves continue to run in parallel to each other – it’s likely the efficiency gains come from the new backplane technology of the Note20 Ultra. The S21 Ultra’s power curve however is clearly more divergent at increasing brightness levels, which is a sign of improved luminance efficiency as opposed to panel drive efficiency, which is exactly what we’d expect given the new emitter technology.

Rather than demonstrating power at a unrealistic full-screen white, let’s take something with a more realistic average picture level, such as the AnandTech homepage:

The scenario here is both the S21 Ultra and S20 Ultra side-by-side, set to 120Hz FHD, calibrated to 300 nits brightness, and under brighter ambient light conditions to trigger the S21 Ultra’s VRR/LFD mechanisms. 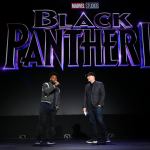 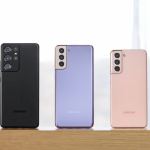