Intel announced its 13th gen lineup of Core CPUs last year, but we were promised one last, superpowered chip that didn’t launch that day. Intel just showed off how fast it is, and spoiler alert — it’s really fast.

Intel just announced the Intel Core i9-13900KS, its top-of-the-line and most expensive offering, and the first desktop CPU that can deliver a speed of 6.0 GHz out of the box. Plenty of processors have reached that speed with overclocking, and have gone even faster, but this is the first CPU that can reach that speed from the factory.

Like previous KS-series CPUs, this chip is just a souped up i9-13900K. That processor already came pretty close to the 6 GHz barrier, with a turbo speed of 5.8 GHz, so this new chip just brings things over the finish line to break that mark. Whether this means any good news for performance will remain to be seen — after all, AMD has new superpowered CPUs coming soon as well — but this new chip does bring the desktop processor space into uncharted territory. But it’s certainly looking good — it’s already topping benchmarks like UserBenchmark and PassMark.

It’s a fresh surprise to see Intel speeding up to 6 GHz. Hopefully, we can get many more CPUs like this in the future, but the fact we have one now doesn’t necessarily mean we’ll have more this year, or next year. The 5 GHz barrier was a very fiercely fought one, and AMD and Intel only moved all of their processors to 5 GHz just last year. AMD technically got up to 5 GHz first, with the FX-9590 all the way back in 2013, so there were nine years before that mark was consistently surpassed.

This chip will retail for $699, so you should check on your retailer if you want to equip your gaming PC with this chip. 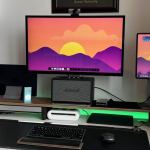