Intel’s bread and butter budget platform for the last few years, Gemini Lake chips have offered two or four CPU cores, as well as the interesting UHD Graphics 600/605 iGPUs, which ended up incorporating a mix of Intel’s Gen9 and Gen10 GPU architectures. These chips have been sold under the Pentium Silver and Celeron N-series brands for both desktop and mobile use, with TDPs ranging from 6W to 10W. All told, Gemini Lake doesn’t show up in too many notable PCs for obvious reasons, but it has carved out a bit of a niche in mini-PCs, where its native HDMI 2.0 support and VP2 Profile 2 support (for HDR) have given it a leg up over intel’s 7th/8th/9th generation Core parts.

None the less, after almost 3 years in the market Gemini Lake’s days are numbered. In the long-run, it’s set to be replaced with designs using Intel’s new Tremont architecture. Meanwhile in the short-run Intel’s budget lineup will be anchored by the Gemini Lake Refresh platform, which Intel quietly released in late 2019 as a stopgap for Tremont. As a result, Intel has started the process for retiring the original Gemini Lake platform, as the OG platform has become redundant. 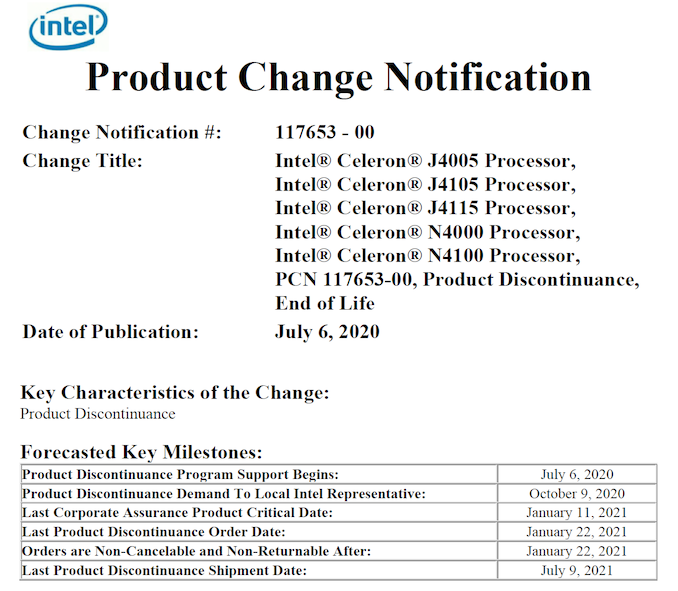 Under a set of Product Change Notifications published yesterday, Intel has laid out a pretty typical EOL plan for the processors. Depending on the specific SKU, customers have until either October 23rd or January 22nd to make their final chip orders. Meanwhile those final orders will ship by April 2nd of 2021 or July 9th of 2021 respectively.

All told, this gives customers roughly another year to wrap up business with a platform that itself was supplanted the better part of a year ago.