We’ve already written about some of the best video game emulators for Android, but DOS emulation is a bit more complicated than copying ROMs and pressing play. Taking your favorite old PC games on the go can involve anything from setting up virtual drives to running command-line programs.

That’s why we’ve decided to create this tutorial, which guides you through picking an emulator and how to install your favorite games on both Android devices and Chromebooks. We’ll also give you some tips for how to get the best experience.

DOS games were designed to be used with keyboards, mice, and/or joysticks. Even though the recommended emulator in this guide (Magic Dosbox) does have support for on-screen controls, they don’t work well, and usually have to be customized for each game.

Unless you want to play games that generally only require a mouse, you will probably need a device with a physical keyboard (Chromebook, 2-in-1 tablet) or an Android-compatible controller to have fun with DOS games.

The first step is, obviously, to pick an emulator. There are a few DOSBox ports for Android, but most of them have been abandoned. My personal favorite for years was DosBox Turbo by Fishstix, but it hasn’t been updated since October 2015, and there are reports of the keyboard and other functions not working on newer versions of Android.

The only actively-developed DOS emulator for Android/Chrome OS at the moment is Magic Dosbox, which is not only still receiving major updates, but is also an excellent application in general. It organizes your games on a shelf, so you don’t have to run them from the command line (like with regular DOSBox), and there are tons of options for speed, hardware, and controls. 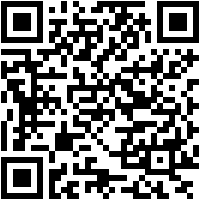 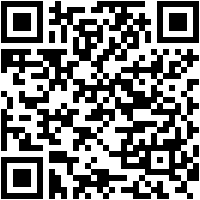 We’re going to use the free version in this guide, but if you end up liking it, you should probably spring for the paid version. It’s cheap ($3.49) and gives you the ability to add more than one game to the main shelf, among other features.

After you install the emulator, you need to create a folder in your internal storage to keep all your game files in. If you don’t already have a files manager on your phone or tablet, download Files by Google from the Play Store.

In my case, I created a folder called “DOSBox” in the root directory of my tablet’s internal storage. Each game gets its own folder inside the DOSBox folder. If your phone or tablet has an SD card, it will definitely work well for this — DOS games don’t require ultra-fast internal storage. 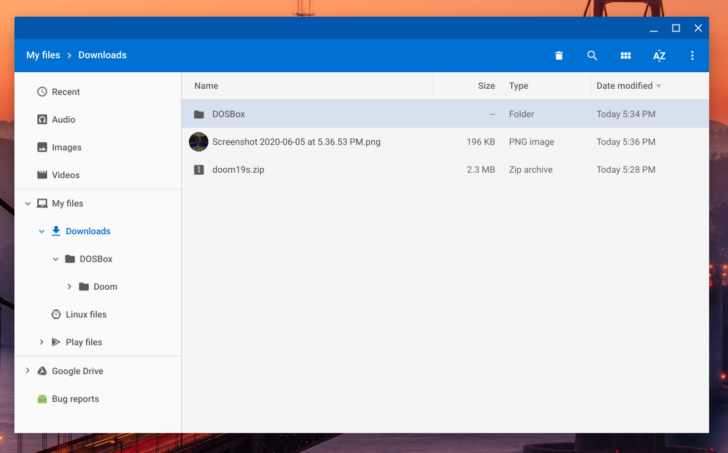 If you’re on a Chromebook, you’ll have to create the folder inside your Downloads folder, because that’s the only directory that both Chrome and Android apps get full access to.

Once you’ve opened Magic Dosbox and finished the initial setup, it’s time to install a game. DOS games and applications can be installed using a variety of methods, so this can be the trickiest part if you’ve never used DOS before (or if it has been a while).

For this first example, we’ll use the original shareware version of Doom. While there are much better ways to play Doom on Android, like the official port released last year by Bethesda, it’s a good example of how the setup process usually goes with DOS games. Also, because it was a shareware release, we can link you to the download without being sued.

Download the installer package to your device, create a folder called ‘Doom’ in your DOSBox folder, then unzip the contents into that folder. The exact steps here depend on which file manager you use, but you usually have to extract the contents of the ZIP file first, then copy/move them into the proper location.

Once that’s done, open Magic Dosbox and create a new game by pressing the plus button. Here you can set all the options for the game, including which folder the files are stored in, CPU speed, sound card, and so on. Some DOS games, especially early titles, require a specific CPU speed or sound card to function properly, but Doom doesn’t require many changes from the default settings.

First, you have to tell Magic Dosbox where the game’s files are — tap the ‘Choose’ button in the Drive section, then select the Doom folder you created in your internal storage. Next, scroll down to the Software section, and for the ‘Setup program,’ select ‘INSTALL.BAT’. 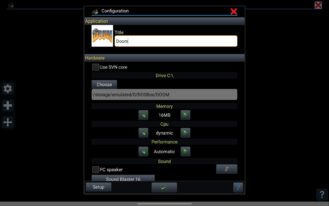 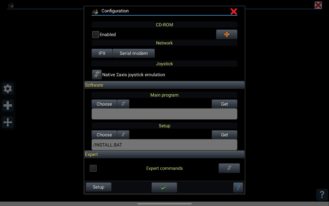 Once that’s done, type in the name ‘Doom’ in the application section at the top (if you haven’t already), and press the checkmark button to save your changes. The game should now appear in the app’s main screen. 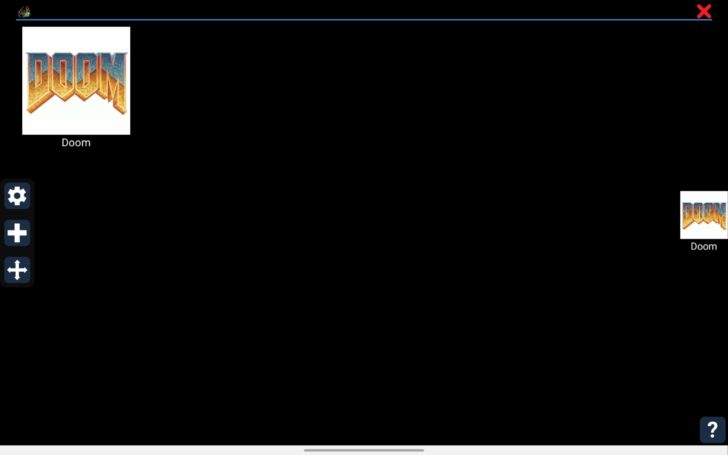 Setting up the game

We can’t open Doom normally from the Magic Dosbox main screen yet, because we’ve only specified a setup program, not the main program. Hold down on the game, press ‘Edit,’ and finally press ‘Setup’ to enter the setup.

If you did everything right, you should see the installation program start up. Pressing your device’s back button (the page back key on Chromebooks) will bring up all of Magic Dosbox’s settings, including options for input, display, taking a screenshot, and other functions. 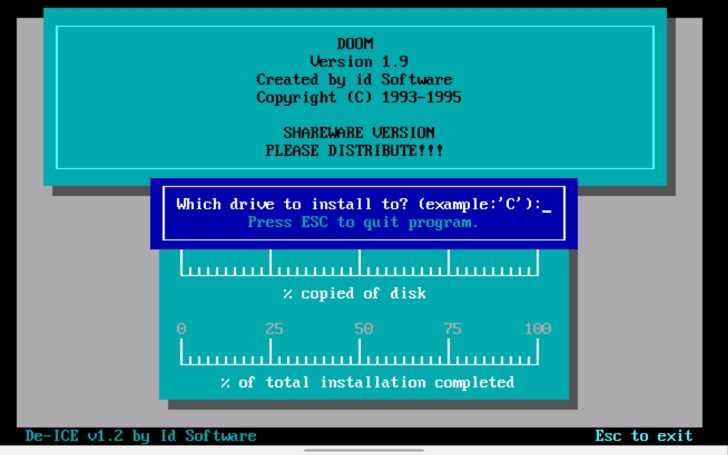 Open up the virtual keyboard if your device doesn’t have a physical keyboard (press back, then tap the keyboard button), type ‘C’ to install Doom to the virtual C: drive (which is actually the Doom folder you created earlier), then press Enter to confirm the installation to the ‘DOOMS’ folder.

Once it’s done copying files, the installer will ask you what kind of control method you’d like to use. Pick the ‘Keyboard+Joystick’ option here, so it will work well with both physical keyboards (over USB, or built-in if you’re on a Chromebook/2-in-1 tablet) and virtual/mapped joystick controls. 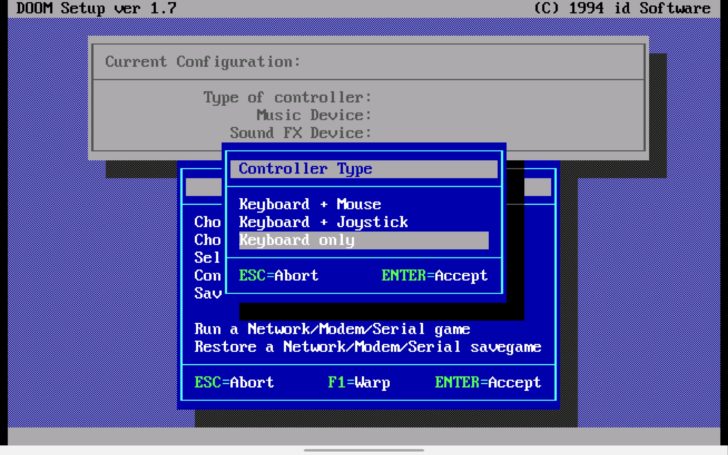 Press Enter on the rest of the installer steps to accept the default settings, and when everything is complete, press Enter on the ‘Save parameters and launch DOOM’ option. The game should start, but before you rip and tear as Doomguy, we need to make one final change to the game’s settings.

Quit the emulation and return to the main screen, hold down on Doom, and press Edit. Set the ‘Main program’ to DOOM.EXE (in the ‘DOOMS’ sub-folder the installer made), and change the ‘Setup’ program to SETUP.EXE (in the same location as DOOM.EXE). Now, when you select Doom, the game itself will open instead of the installation program. The setup button will also now point to the options page for Doom, and not the installer.

Okay, so you have a game installed, but what now? DOS supported multiple input methods for games, but not all titles worked with all types of controls, and even then, Magic Dosbox make it somewhat difficult to use virtual controls (especially if you stick with the free version).

The ideal setup for DOS emulation is a device with a physical keyboard and mouse, touchpad, or stylus.

The ideal setup for DOS emulation is a device with a physical keyboard and mouse/touchpad/stylus, like a Chromebook or a tablet with an external keyboard. Keyboards work in Magic Dosbox without any kind of setup — if it’s external, just make sure to connect it before you start the game. If you’re using a real mouse/touchpad/stylus, as opposed to tapping the touchscreen with your fingers, open the Mouse settings in the emulator and select ‘Absolute’ control. This will cause the virtual mouse to follow your clicks exactly. 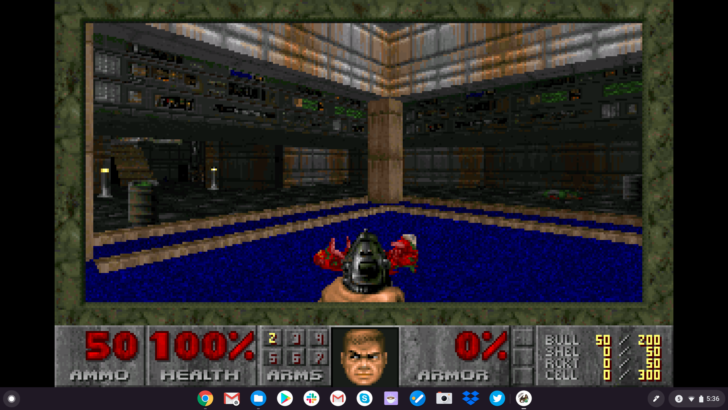 Doom for DOS on a Chromebook

If you don’t want to carry a keyboard or game controller around with you, there are plenty of DOS games that primarily use the mouse for input — making them ideal for touchscreens. Some of my favorites that rarely require a keyboard include SimCity 2000, The Oregon Trail Deluxe (1992), and Sid Meier’s Civilization games. Point-and-click adventures will also work well, though games like Day of the Tentacle and Sam & Max Hit the Road will run much better in ScummVM than any DOS emulator.

Games that support joystick input, or only have a few keyboard keys, should be playable using a physical game controller — as long as the gamepad is compatible with Android. Magic Dosbox allows you to set keyboard keys to buttons on the controller. After mapping the ‘A’ button on my controller to the left mouse button, and mapping ‘X’ to the space bar, I was able to play Doom just fine. 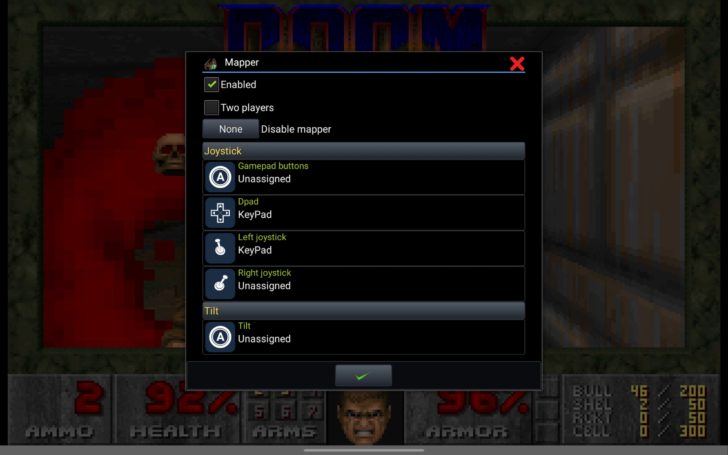 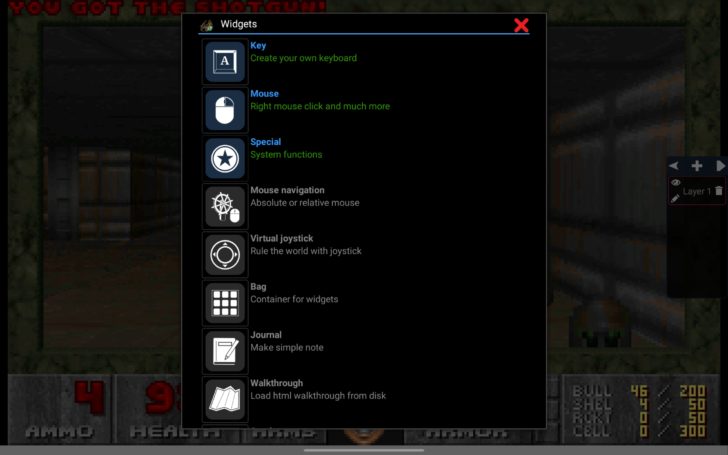 The built-in guide goes over the details, but it mostly just involves holding down on an area of the screen and selecting what kind of button you want there. Most of the options, including the all-important joystick control, are only available on the paid version of the app.

Most DOS games are archived as a collection of files, which you can usually dump in your DOS folder and not run into any problems. However, there are times when you might want to use an image (a digital copy) of the game’s CD instead. For example, some games always expect the CD to be inserted and aren’t designed to run entirely from the hard drive. Using disc images also keeps Android from indexing the contained files, so you won’t get a popup from Google Photos asking if you’d like to backup random images from the game.

Let’s use the ISO image for The Ultimate Shareware Games Collection from 1995 as an example. Download the ISO file from the archive page and put it inside your DOS games folder, like in the screenshot below. If it has an .img ending, rename it to use the .iso ending, or Magic Dosbox won’t be able to detect it. 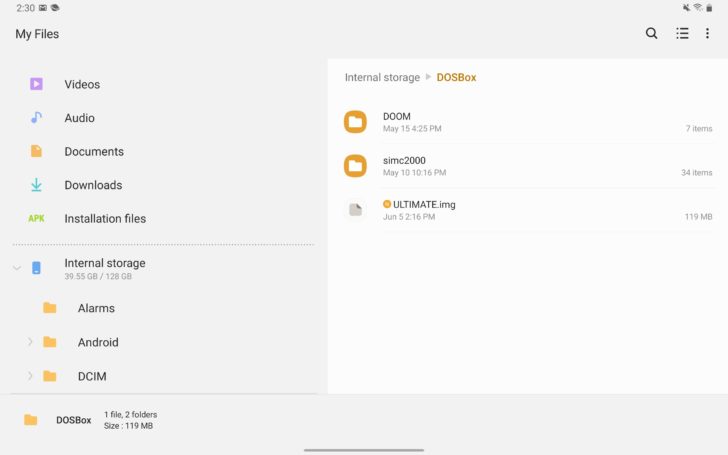 Now, create a new game in Magic Dosbox, and set the C: drive to your usual DOS folder. In the CD-ROM section, check the ‘Enabled’ checkbox, then press the plus button. Tap the ‘Choose button’ and select the ISO file. Finally, type a label for the CD (it can be anything), and press the checkmark button to save your changes. 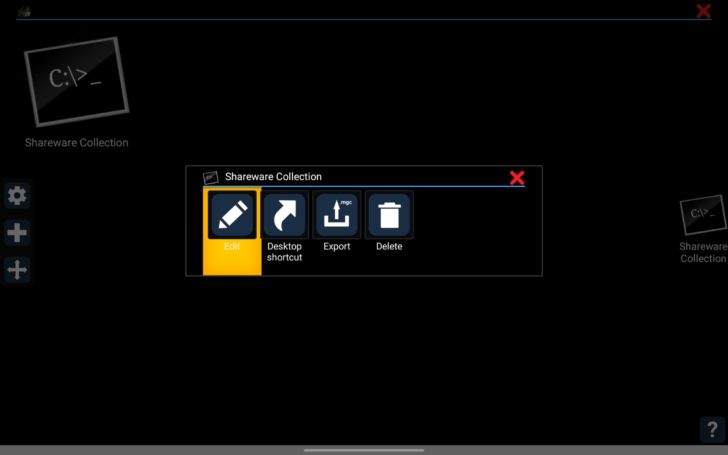 Once that’s done, you can select the setup program just like you did with Doom, but Magic Dosbox will now give you the option of picking files from the CD image. After installation is complete, you can set the main program (from the C: drive) in the game options. 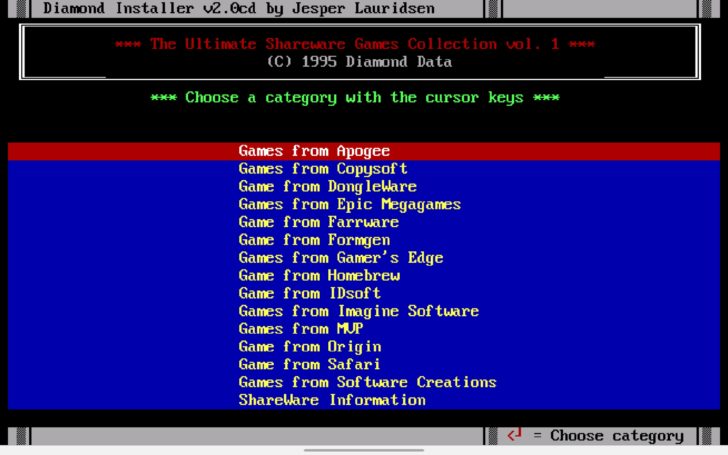 Hopefully, you should now have the knowledge required to play some classic DOS games on Android devices and Chromebooks. Go have fun!

How to play DOS games on Android and Chromebooks originally appeared on AndroidPolice.com