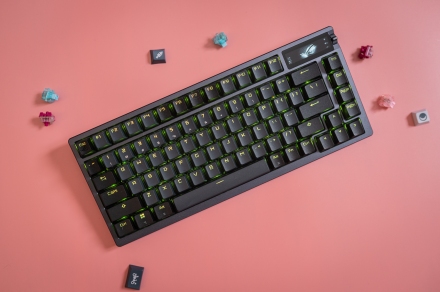 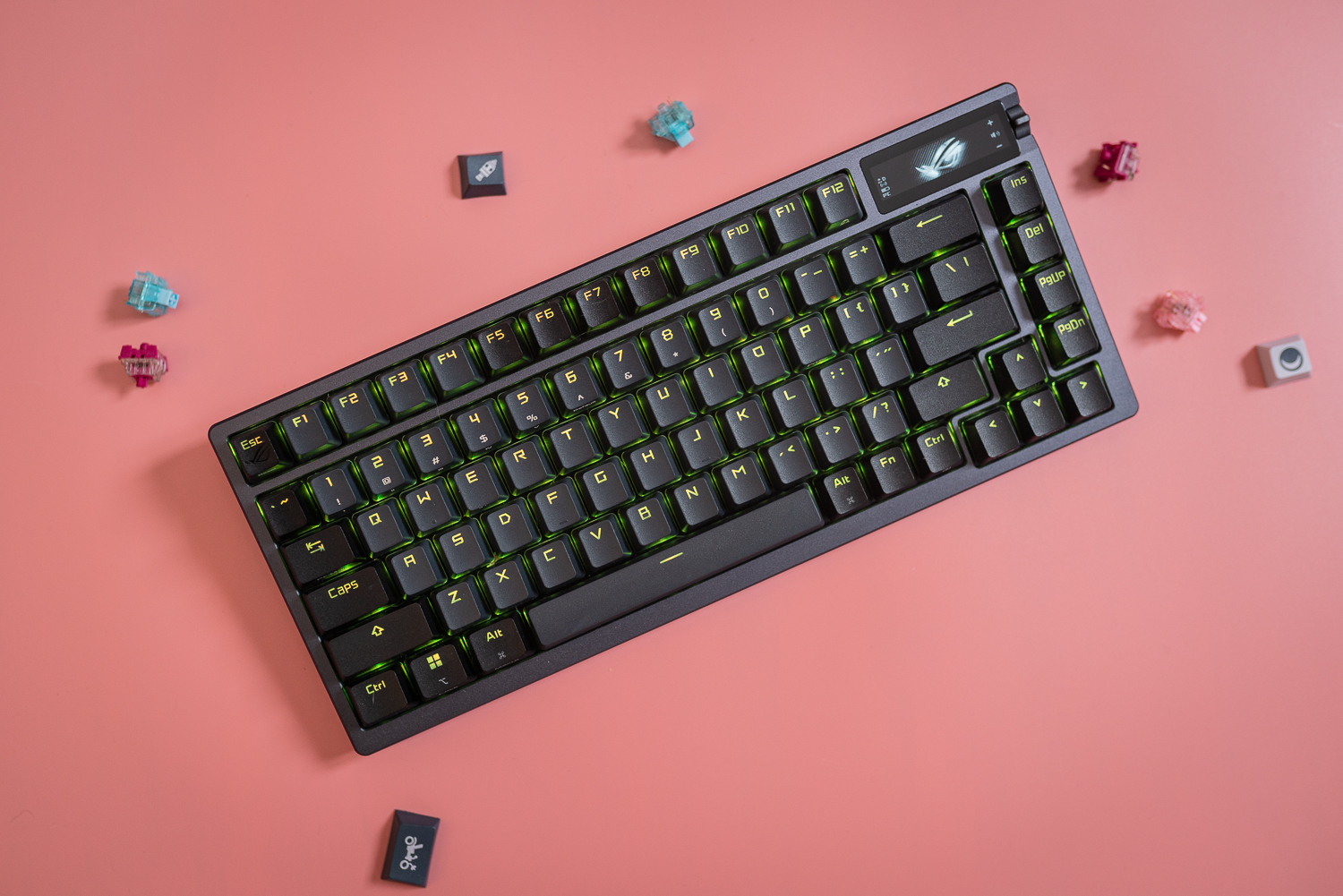 “The Asus ROG Azoth ticks all the boxes of an enthusiast mechanical keyboard, and it still manages to impress.”

I never thought I would prefer an off-the-shelf gaming keyboard over the custom mechanical keyboard I built last year. But here we are.

When Asus announced its ROG Azoth, I knew immediately it was one of my most anticipated products of the year. Based on the spec sheet, it’s a piece of kit that sits among the best gaming keyboards you can buy. I didn’t expect it to be better than a custom, enthusiast-grade mechanical keyboard, though, and it is. Still, there are a couple of minors areas I’d like to see Asus improve with a version two.

The look of the ROG Azoth is immediately recognizable to anyone in the world of enthusiast mechanical keyboards. It’s a 75% design, following in the footsteps of the Glorious GMMK Pro and Drop Sense75. There are some critical changes, though.

The top is an aluminum frame, but there isn’t aluminum all around the body like the GMMK Pro or Sense75. The Azoth is a hefty keyboard, but it’s not nearly as heavy as these other enthusiast models due to its plastic bottom.

There’s a good reason for plastic here. The defining feature of the Azoth is that it supports 2.4GHz low-latency wireless and Bluetooth in addition to a wired connection. There isn’t another keyboard of the caliber of the Azoth that supports wireless, and that’s mainly because it’s hard to transmit a wireless signal through aluminum. Asus compromised, and I’m glad it did.

Battery life is exceptional too, even with the feature-rich OLED screen on the board. I started using the Azoth out of the box without charging (it arrived at about half battery). After a week of daily use, I only needed to charge it once, and I still have half the battery left as I’m typing this review.

The 75% form factor doesn’t automatically make the Azoth an enthusiast keyboard, and Asus has a lot of justifying to do for the $250 list price. I’m not comparing the Azoth to keyboards like the Razer Huntman V2 — which is similarly as expensive — because it comes with the features and typing experience worthy of an enthusiast badge.

It uses a gasket mount, which was previously reserved for obscenely expensive keyboards like the Angry Miao Cyberboard R2. The plate is offset on silicon gaskets, which provide a soft cushion for your keystrokes and the satisfying thunk of a high-end mechanical keyboard.

Asus combines the gasket mount with stabilizers that make large keys like the space bar feel smooth no matter where you strike them, as well as plate foam to cut down on the metallic ping that’s undesirable for mechanical keyboards. The result? A sublime typing experience that even high-end enthusiast keyboards can’t rival.

The only exception are the switches. Asus includes its own NX switches, either in a red (linear), blue (clicky), or brown (tactile) variety. I used the brown switches, and they’re better than the garden variety Cherry switches you find in keyboards like the Corsair K70 RGB Pro. The switches come pre-lubed, and they feel worthy of the price tag. But this a keyboard that demands upgrades, and those upgrades are where it shines.

Make it your own

The Azoth is fully customizable, and its real value lies in picking up some other switches and keycaps and making the keyboard your own. You can change out the switches with an included tool, similar to last year’s Asus ROG Strix Flare II Animate.

I reached for some Akko Wine Red switches and a cheap set of keycaps I found on Amazon — overall, around a $50 upgrade — and it completely changed the typing experience. I still preferred my custom GMMK Pro with the stock configuration, but with a couple minor upgrades? It’s hard ditching the Azoth.

I have a couple of minor issues here, though. For starters, the included keycaps aren’t great. They’re double-shot PBT and plenty durable, but Asus includes some weird additions. For example, you normally find a raised edge on the F and J keys to signal where your home row is, but Asus moves this to the W key instead. I understand that this is a gaming keyboard, but while playing games, the raised edge becomes an annoyance more than a helpful guide.

Another problem is that the Azoth uses a north-facing PCB. The RGB LEDs are at the top of the switch housing instead of the bottom. This is to allow the light to shine through translucent legends on the keycaps, but north-facing PCBs can interfere with certain keycaps and lead to a less-desirable sound and typing feel.

Even with those issues, there’s no denying that Asus is pushing mainstream mechanical keyboards to a place they’ve never gone before, and I’m on board.

I’m not much for gimmicks on keyboards, but the OLED display on the ROG Azoth isn’t a gimmick. It’s a highly functional multipurpose hub that makes it a breeze to cycle through settings, change your brightness, and add a bit of flair to your desk.

On the side, there’s a switch that you can toggle up and down to change volume, adjust brightness, etc. You can also press down on it for another function and use a button on the side for yet another. Combined, you can cycle through media controls, brightness settings, and lighting effects with a few clicks.

You can customize these functions in Asus’ Armoury Crate, too. The OLED display goes much further and can display custom animations, text, and even some limited system information like your CPU and temperature. All these settings are stored in a profile, and you can store up to six profiles on board, too.

This is the kind of mainstream functionality you just don’t find on an enthusiast keyboard. Asus is bringing the best of both worlds together here.

The gaming keyboard to beat

Even with everything I covered in this review, the Azoth brings even more features, including MacOS support and a lubing station for your key switches. Asus is beating enthusiast keyboards on the feature front and mainstream keyboards on the quality front.

What’s shocking is that Asus isn’t charging much of a premium, as $250 isn’t cheap for a gaming keyboard. That’s the same price as the Corsair K100 and $50 more than the SteelSeries Apex Pro. You’re getting a far higher-quality keyboard with the Asus ROG Azoth for that price.

Today’s tech news, curated and condensed for your inbox

This email address is currently on file. If you are not receiving newsletters, please check your spam folder. 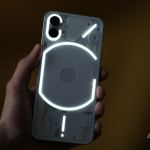 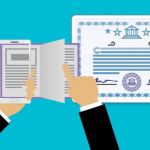