ASRock and Razer have today announced a product collaboration. Two of ASRock's premium models for AM4 are being updated with Razer styling and Razer Chroma connectivity: the X570 and B550 Taichi Razer Edition. Built upon the popular Taichi series, both of the new Razer Edition variants include a 16-phase power delivery, with official support and compatibility with Razer's Chroma RGB ecosystem.

Whenever Razer does a collaboration with any company in the hardware industry, it gets people excited and talking. One of the most prominent brands globally with its green inspired peripheral range, as well as its various wacky ideas such as an RGB gaming toaster; I can't ever be as excited for a toaster as much as the Chroma Edition. 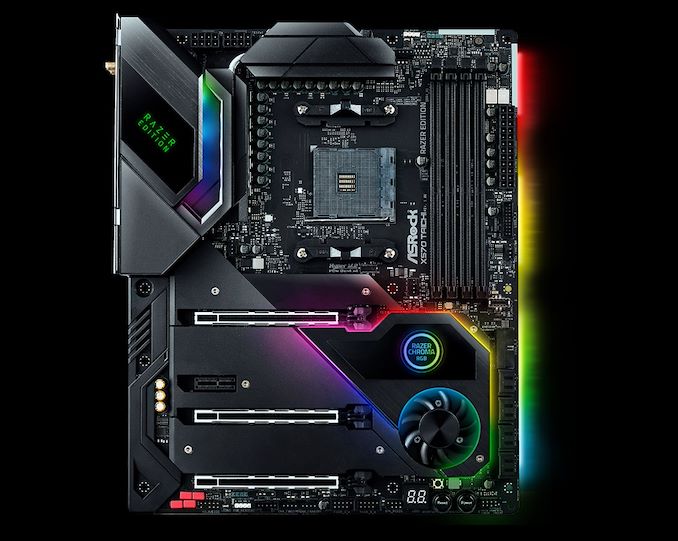 Back to the actual hardware, and it has teamed up with ASRock, a company seemingly fearless when trying new and off-the-wall ideas. This has realised the two new models, the B550 and X570 Taichi Razer Edition. The Taichi series is one of ASRock's most popular ranges, especially in the premium motherboard space, and the new Razer Editions will build upon this with both the AMD AM4 500 series chipsets being treated to some Chroma.

Both the ASRock X570 and B550 Taichi Razer Edition models will feature much of the same feature set including a large 16-phase VRM, built with premium 60 A chokes and Nichicon 12K black capacitors. In regards to the actual specifications, both of these new models correspond nearly identically with its non Chroma counterparts. The X570 Taichi Razer edition includes three PCIe 4.0 x4 M.2 slots, eight SATA ports from the chipset, a 2.5 GbE port as well as a Killer AX1650 Wi-Fi 6 module. For the B550, it is slightly lower down the pecking order due to the PCIe 4.0 support coming only from the CPU. It includes one PCIe 4.0 x4 M.2 slot, with an additional PCIe 3.0 x4 M.2 slot with eight SATA ports, four from the chipset and four from an ASMedia SATA controller.

The biggest impact and only differences between the standard X570 and B550 Taichi's compared to the Razer Edition models comes visually, with Razer's flair located around the board itself. The addition of addressable RGB headers taps into one of the biggest RGB Ecosystems around, the Razer Chroma RGB. On both models, the Razer logo can be found on the rear panel cover and the chipset heatsinks, for a bit of added flair and vibrance that RGB offers. These aren't OLED screens, just Razer branded vanity plates.

It should be noted that Razer is famous (infamous?) for doing things like green USB ports to unify the branding. That hasn't happened here however, indicating that this is more of a collaborative branding exercise rather co-design effort.

As it stands, the ASRock X570 and B550 Taichi Razer Editions aren't on the open market and neither company has opted to announce a release date or pricing. Given that both models include official pages (X570 and B550) on the ASRock website means that this launch for its target markets (TBA) should be imminent.